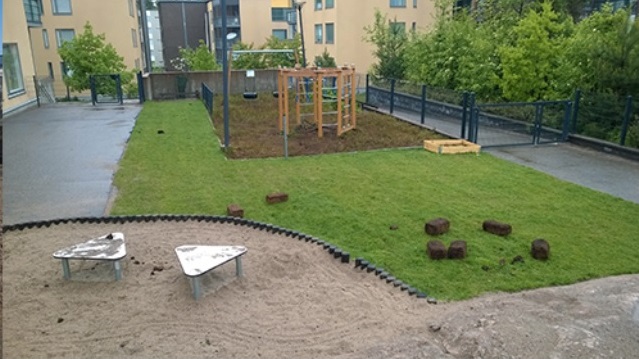 Are we more prone to illness because modern environments have become more sterile and divorced from nature? Recent research from Finland suggests that children’s immune system can be boosted by letting them play in soil more often.

A team of Finnish researches studied ten daycare centers in two cities in Finland (Lahti and Tampere, both with populations above 100,000). Each of standard urban daycare centers contained yards of approximately 500 sq. m. with little or no green space.

In four of these daycare yards – “intervention daycares” – part of the gravel was covered with forest floor (100 sq. m.) and with sod (200 sq. m.). Intervention daycares received segments of forest floor, sod, planters for growing annuals, and peat blocks for climbing and digging. Three non-modified yards (“standard daycares”) were the control group, while three were nature-oriented daycare centers served as a positive control.

Vegetation in the transferred natural forest floor in the intervention daycares consisted mainly of dwarf heather, blueberries, crowberry and mosses. The sod consisted of fescues and meadow grasses.

Nurses of the daycare centers guided children to be in contact with the green materials brought into the yard. Guided activities included planting plants in planting boxes, crafting natural materials, and playing games. In addition, green materials were available to children during free outdoor activities. Children played in the yards between half an hour and 2 hours, twice a day. The intervention lasted for 28 days.

The research found that bringing nature into daycare playgrounds made the children’s microbiome (the collection of microorganisms that naturally coexist within and on our bodies) more diverse. Simultaneously they found better immune function in the preschoolers in the intervention daycares, with a less inflammatory state. The children’s blood samples showed a better ratio of an anti-inflammatory immune system protein called IL-10, in relation to a pro-inflammatory protein called IL-17A.

In recent years more people have become aware around the world about the importance of maintaining a healthy gut microbiome and are using more probiotic foods to improve their gut flora.

However, environmental ecologist Aki Sinkkonen from the University of Helsinki points out that probiotics usually contain only one or two types of bacteria, whereas exposure to soil brings a much more diverse microbial environment.

While the researchers and other scientists say this is a preliminary study with a small sample, and the exact mechanism is not fully explained, it does show that microbe diversity in the top layer of soil seemed to be critical, and the children digging around, planting vegetation actively was important.

So if you’re a parent, the solution to healthier kids might be more dirt and bugs, not less.

(Read more details about the research.)