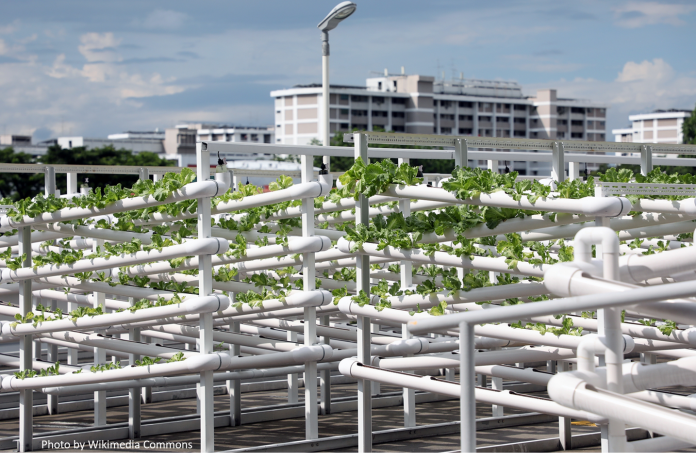 Until the 1970s nearly 1 in every 10 Singaporeans was directly or indirectly engaged in fishing or farming activities. Due to rapid urbanization in the 70s and 80s, land-use patterns and occupations changed, and land dedicated to agricultural activities dropped significantly, causing production costs to become much higher than the rest of Southeast Asia.

With minimal land under farming, the densely populated city-state produced less than 10% of its nutritional needs, the rest being met through imports.

However, keeping in mind factors such as climate change and population growth, in the last few years the Singaporean government decided to boost local food supplies. The Singapore Food Agency (SFA) set up the Agriculture Productivity Fund (APF) of S$63 million in 2014. Of the total amount, the majority was earmarked for developments to improve productivity in existing farms, while roughly S$10 million was set aside for research and development in innovative production technologies.

In early 2019, the SFA launched the “30 by 30” campaign whose objective is for Singapore to meet 30% of its nutritional needs locally by 2030. The campaign works through additional grants and incentives promoting urban agricultural innovation to support production of vegetables, eggs and fish using all available spaces, no matter the size.

An additional S$ 3-4 million dollars was allocated to the Landscape Productivity Grant, managed by the National Parks Board. Setting some criteria on the layout of the farms, operations and resultant output, the board ensures support in utilities costs such as potable water, electricity, telecommunications cables, sewage pipes and roadways.

In the apartment complexes that are government-funded, sections of rooftops and car parks have been designated as agricultural spaces.

While encouraging citizens to join the movement to grow food in and around their homes, the SFA has also taken steps to promote consumption of fresher and more nutritive locally-produced foods. In 2020, they introduced the SFA Fresh Produce logo which will help consumers identify local produce in markets.

Numerous initiatives have cropped up across Singapore led by individuals, communities and businesses, which include:

Numerous educational, residential and professional institutions within the city-state have invited EGC and Foodscape Collective to educate and transform spaces available to them.

Other than its aim to increase domestic production for strengthening the ability to sustain itself; due to a weighted focus on Agri-Tech innovation, Singapore also seeks to export its technological advancements to other countries.

Keep Calm and Curry On!

A Square Metre to Feed A Family

In Berlin, Cultivating A Taste For Plants