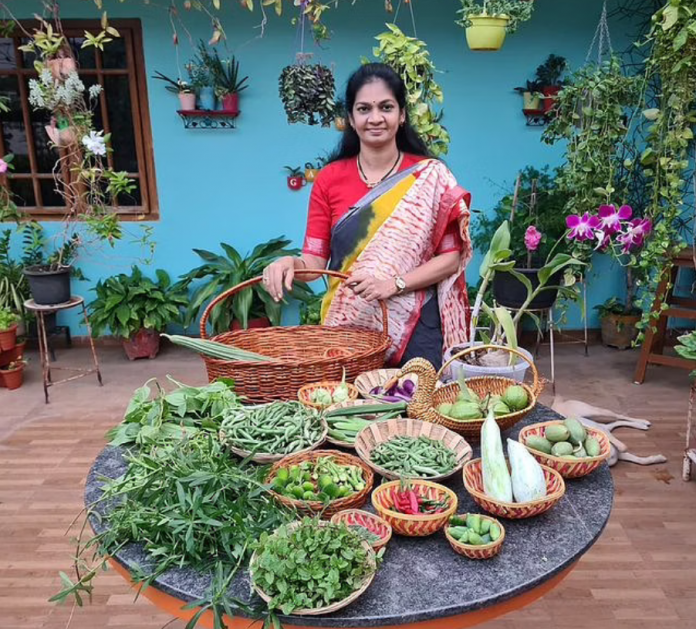 Urban farmer Madhavi Guttikonda lives in the coastal Indian city Visakhapatnam (Andhra Pradesh), also known as Vizag. Along with her family, she has nurtured her terrace garden with such passion and consistency that it lives on as a thriving ecosystem of plants, birds and bees.

Passionate about plants from an early age, Madhavi began her terrace garden adventure as an experiment to grow leafy greens for her kitchen use. This exponentially grew when her children helped launch her YouTube channel Mad Gardener in 2018.

On her channel, she has a following of over 520,000 followers, with higher than 99 million total views of her content. Over time, she has shared her urban farming journey in Telugu and English on YouTube, Instagram and Facebook. She has an active and growing following on all platforms.

In her videos, Madhavi explains the importance of methods employed, the understanding she has developed about her plants and ‘How to’ instructions for garden activities. She communicates with her viewers through comments and the videos they share about their own growing experiences.

She says when people look at the plants they’re in awe of what shows above the soil, while the real magic occurs underneath the soil. That is where the soul of the plant is, according to her. Madhavi shares about the science of the soil, from her perspective, as she walks about her own garden. When sharing the importance of microbes in the soil she often reminds her viewers to provide nutrients and moisture to new soil in order to boost its microbial activity.

The terrace set up

While the main section of her terrace garden is that of the seasonal vegetables with their short harvest cycles, Madhavi also grows fruits and has a dedicated section solely for flowers. Her garden is home to orchids, hibiscus and chrysanthemums, varieties of gourds and beans, tomatoes, cabbages, chillies, cauliflowers and leafy greens like spinach, amaranth and sorrel, mulberries, dragonfruit, papayas, strawberries, cherries, lemons and sugarcane. With the variety grown on her terrace, she has not just bees as visitors but even sunbirds nesting there.

Roughly 90% of her kitchen needs are met by produce from her garden. She also enjoys sharing the produce with her neighbours and friends.

She has received recognition from the agricultural magazine Rythu Nestham (which introduces farmers to new methods of organic farming). The award in the terrace garden category was presented to her by the Vice-President of India.

An essential activity for Madhavi is to compost her kitchen waste which she uses as a base for many of the vegetables she grows.

“Spending time in my garden is meditative for me. As kitchen gardeners, we are also designing the inner structure of the fruit and vegetables that we consume. I believe plants can sense our presence and this probably helps in increasing their yield,” she shared in one interview.

Here’s a video that provides a 360 degree view of Madhavi’s terrace garden.