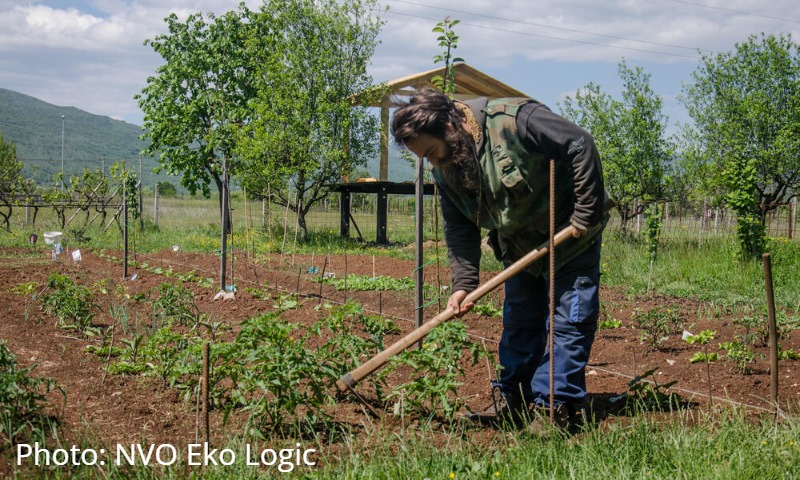 Whether due to job losses or as a way to escape the dull reality of quarantine measures, or both, many citizens of Montenegro have started cultivating gardens, parks and any other available land during the COVID pandemic.

Since this spring, new urban farmers in Bar and other towns have either launched or joined existing civic initiatives that promote urban gardening and cultivating healthy organic food.

Some of these associations, such as the Plantadjun and Experimental Garden projects, already produced their first harvests at the end of this summer. They gave away some of their produce as donations to charities and religious organizations that feed people in need.

The small and mainly mountainous country of only a little above 600,000 citizens has limited agricultural capacities. Only 13.7 per cent of the country’s territory was suitable for arable production, the industrialization across Yugoslavia at the end of World War II led to depopulation of the villages and increased tourism over the past decade has contributed to the decline of agriculture. Imports of fruits and vegetables has grown from 37.7 million euros in 2009 to to 76.3 million euros in 2019, while exports dropped from 6.9 million euros to 6.4 million euros during this time.

Among the pioneers of the urban gardening revival in Montenegro was the Ekologika garden, established in 2014 in a neighborhood of Mareza, six kilometers from the centre of the capital, Podgorica. The founder Aleksandar Novovic, a political scientist, invited residents of nearby urban areas to use his family’s land for free, without any help from public funds, with the sole aim of promoting eco-friendly urban gardening.

This idea was further developed by several civic society initiatives and projects, such as Plantadjun, which promotes urban gardening as a way to support socialization and the cultivation of healthy food. Its pilot project, which started in January this year in the municipality of Bar, received much publicity in local and national media as a success story, especially after the outbreak of COVID 19.

The project used private land, without paying any rent for it. Each of the participants, or Plantadjuns, was supposed to cultivate a 25-square-meter plot; in this first year, the produce was either used for private consumption or was shared with friends and neighbours to promote the project.

Next year, all Plantadjuns will be obliged to give 10 per cent of their produce to the owner of the land, and another 10 per cent for the sustainability of the project; this will be sold on local markets and the funds reinvested to buy seeds for the next planting season.

Project coordinators will monitor the entire process and supervise the measuring, collecting and distribution of the produce.

Project teams will also organise the preparation of the soil for sowing, including ploughing and fertilization, as well as obtain necessary materials such as seeds, water, tools and a tool shed.

The project was supported this year by the Ministry of Science of Montenegro and Bar city administration. By the end of the season, Plantadjuns had collected over 1,000 kilos of vegetables, mostly zucchini, potatoes and tomatoes.

After providing numerous food donations for people in need during the summer season, Plantadjun and Ekologika partnered up in November with Paradigma, an NGO that fosters sustainable, eco-friendly practices and movements.

“When it comes to sustainable agriculture, most people only look at it through its environmental and economic aspects; they neglect the social aspect, which is also very important,” Bar city administrator Cazim Alkovic says, “Especially in these times of the further impoverishment of the population.”

Food, a Vehicle of Liberation

Reconnecting With The Land