As the rules of the Food Safety Modernization Act are finalized, greenhouse growers will be required to ensure the edible crops they produce are safe for human consumption.

The purpose of the law, according to the U.S. Food and Drug Administration, is “To ensure the U.S. food supply is safe by shifting the focus from responding to contamination to preventing it.” In September 2015, two of the FSMA’s rules. These rules, according to FDA, “focus on implementing modern food manufacturing processes for both human and animal foods.”

FDA said the rules “Will work together to systematically strengthen the food safety system and better protect public health.”

Phil Tocco, food safety educator at Michigan State University Extension, said FSMA is the first law in the United States to regulate food production, harvest and the movement of fresh produce at the farm gate. “Up until now if you were a retail grocer, a retail restaurant, or if you were preparing food, you had regulations placed upon you and how you did things,” Tocco said.

“If you were manufacturing a food product from raw materials, there were rules that you had to follow, particularly if you were working with potentially hazardous foods such as seafood or if there was a potential issue if you were slaughtering animals. There were regulations in place. However, there were no regulations for the harvest and transport of fresh produce at all. If you were harvesting fresh produce you didn’t have to follow any rules to do so.”

Tocco said growers need to think strategically about food safety when they first start out. “All restaurants have to have at least one person on staff that has ServSafe certification. They have taken a test indicating that they are ServSafe certified. They understand the concepts related to food safety.”

Tocco said many growers he has met were successful chefs before they moved to food crop production. “It makes a huge difference because these growers start evaluating the practices that they do. They can ask themselves if their food handling practices pass muster.”If a grower sells his product at a farmers market, he better be able to answer the questions that consumers are going to ask about food handling and food safety.

Tocco said the food safety risks encountered by an outdoor field grower are much reduced in a controlled environment warehouse or greenhouse. 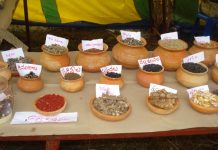 How EcoFarms changed the lives of 15,000 farmers