With more reports sounding alarms about looming food scarcity issues, there is a boom in agriculture tech, breeding companies offering everything from unorthodox growing setups to soil sensors, hydroponics and all manner of crop data analytics.

Just look at Urban Tilth, City Slicker Farms or the Green Bronx Machine, which all grow affordable, high-quality food on underused land — and manage to create job or help alleviate food deserts in the process.

Cities also are starting to play along, with officials in California cities such as Oakland, Sacramento and San Francisco actually moving to ease regulatory requirements or add incentives for urban farming.

Of course, there are lots of potential pitfalls in all of this.

Figuring out how to regulate urban farms — even putting into place checks for food safety and other basic processes — is one issue. In markets with high costs of living and intense competition for expensive land, such as San Francisco, it’s also a tough judgement call to grow food on large lots instead of building housing for residents facing $3,500-a-month rents.

With one United Nations report even noting that one-fifth of the world’s food is grown in urban areas — everywhere from informal backyard plots to high-tech vertical farms — one overarching concern is avoiding ills such as cost-cutting, dependence on toxic fertilizers and ecosystem degradation that have plagued the industrial food system.

Even fundamental issues such as the size of farms become more pronounced in urban environments.

From new variations on greenhouses to farms designed to grow up instead of out, here’s a look at the companies leading the urban ag charge.

The company’s signature product, the “Leafy Green Machine,” is a ready-made hydroponic farm inside a 40-foot-by-8-foot-by-9.5-foot shipping container that uses LED lights and drip irrigation. The company also created an app, farmhand, that allows customers to remotely track conditions inside the container, such as temperatures that are crucial for food safety.

Rather than framing food grown on farms as an equal replacement for field-grown crops, AeroFarms (like several of its competitors) emphasizes year-round availability and capabilities for growing finicky foods that carefully must be monitored. In addition to better water efficiency and the appeal of pesticide-free produce, the company also plays up the trend toward local supply chains, stressing fewer transportation miles traveled and closer ties to communities.

The company’s first few farms in Kansas City, Missouri, and northern Virginia certainly don’t operate in the densest of cities, but BrightFarms is pushing the boundaries of sustainable agriculture. With its Bucks County, Pennsylvania, operation, the company inked a first-of-its kind, long-term “Produce Purchase Agreement” with independent grocer McCaffrey’s.

The Brooklyn-based company builds rooftop aquaponic greenhouses that grow organic greens, mushrooms and herbs with the help of manure from tilapia and prawns also grown in the mini-farm. Sensors within the greenhouse also collect data on environmental conditions and the wastewater from the sea creatures, providing information to growers about which operation components need attention.

Detroit Dirt functions as the middle man between businesses that generate lots of waste (such as restaurants and the city’s zoo), taking that waste and processing it at a 2.5-acre composting facility before selling it back to urban farmers in need of nutrient-rich soil. Detroit Dirt also works directly with corporations to launch community farms.

According to a recent report by Wired, the company aims to provide both hydroponic and aeroponic systems, a data log to monitor the health of plants and when they will be ready to harvest, as well as a way to interact with other customers growing their own food.

One of the few large companies to wade head-first into its own ag tech venture is Japanese IT company Fujitsu, which has received notoriety for its endeavors growing lettuce in large-scale vertical structures.

While many urban ag startups favor aluminum racks and other more industrial touches, Grove has folded its indoor farming technology within furniture designed to blend in with apartment decor. The company is accepting refundable $100 deposits for the first batch of products expected to ship this winter and sell for less than $5,000.

In addition to developing a patent-pending cylindrical growing structure, the company advertises its capacity to advise those looking to establish their own indoor farms on everything from market research and real estate search to CAD design, installation of equipment, training and food distribution.

This is an autogenerated summary from a published source: 10 companies feeding the urban farming boom | GreenBiz 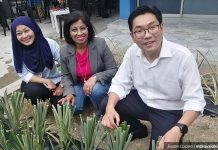