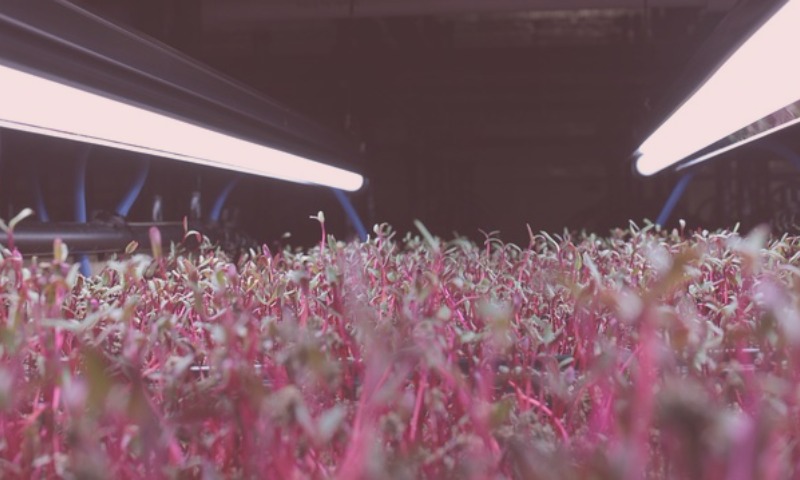 Under an anonymous back street in south London lies a vast underground air-raid shelter that has been turned into a pioneering urban farm supplying supermarkets and restaurants in the capital.

The World War II shelter in Clapham, which could protect up to 8,000 people from Nazi German bombs, consists of two large tunnels that were intended to one day become an extension of the London Underground.

The World War II shelter in Clapham consists of two large tunnels that were intended to one day become an extension of the London Underground. The tunnels have no natural light and are illuminated with pink LEDs, giving them a futuristic look.

‘We need to create these new fertile spaces’ to meet increased demand from a growing global population, Dring told AFP on a visit to the Growing Underground site – some 108 feet below the road.Staff wear protective clothing and there is a strong smell of vegetables and humidity in the shelter.

Micro greens seeds are processed inside buckets filled with water at the urban farm project, ‘Growing Underground’. Fans enthuse about the intensity of the flavours of the produce.

Customers include Marks and Spencer which offers the produce in some of its supermarkets, several stalls at London’s Borough Market and many restaurants – helped by the patronage of celebrity chef Michel Roux Jr. of Le Gavroche.

Steven Dring and Richard Ballard latched onto the concept of vertical farming – producing food in vertically stacked layers – which was developed by US biologist Dickson Despommier in his 2010 book The Vertical Farm: Feeding the World in the 21st Century.

This type of farming is ‘100 times cheaper’ than setting up an urban farm on the surface, Dring said.

Experts say vertical and urban farming could be ways not only of facing up to population growth but also growing urbanisation worldwide as well as climate change.

Nottingham University’s Centre for Urban Agriculture said on its website that urban farms create jobs, reduce transport costs and pollution as well as offering an ‘opportunity to develop technologies’.

The Growing Underground project sends its data on humidity, temperature and plant growth to Cambridge University to try and improve efficiency.

Source: The underground world of urban farming in London