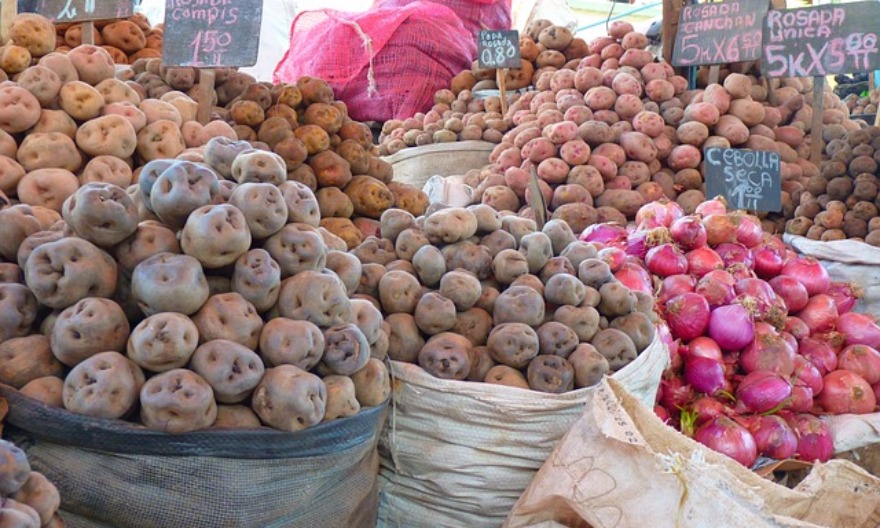 Potatoes are native to the Andes, and over 4,000 varieties are grown there now. They come in numerous shapes, sizes and colors – red, yellow, purple, striped and spotted.

This wide array of types is an example of agrobiodiversity – a genetic legacy created by natural selection interacting with cultural practices over thousands of years.

Today, however, agrobiodiversity is declining in many countries.

In Mexico farmers are cultivating only 20 percent of the corn types that were grown there in 1930.

Chinese farmers are producing only 10 percent of 10,000 varieties of wheat that were recorded there in 1949.

More than 95 percent of known apple varieties that existed in the United States in 1900 are no longer cultivated.

According to Bioversity International, an international research and policy organization, just three crops – rice, wheat and maize – provide more than half of plant-derived calories consumed worldwide.

Although the United States has 10 times more people than Peru, only about 150 varieties of potato are sold here.

Certain global dynamics, such as urbanisation and migration, can be compatible with agrobiodiversity production and consumption.

Such changes can even support the innovative use of local food varieties, but only under the right conditions. Farmers must have sufficient land and water. They have to continue preferring these food flavors and tastes. Vibrant local markets for these foods make producing them economically viable.

Global shifts of urbanization, migration, markets and climate can potentially be compatible with agrobiodiversity, but other powerful forces are undermining it. The imperatives of producing food at lower cost and higher yield clash with efforts to raise high-quality food and protect the environment.

The future of agrobiodiversity hangs in the balance.